This work revisits and displaces Steve McQueen’s work Dead Pan, 1997 which in turn —as if it were a game of mirrors— takes a scene from the Buster Keaton film Steamboat Bill, Jr., 1928. The central element in this chain of references is the fall of a façade of a house onto the body of the protagonist: Buster Keaton, Steve McQueen and Aukje Dekker. If comedy is what drives the situation in the Keaton film, McQueen opts to displace the emotion, remaining still and hieratic. We move from classic cinematographic language to video performance, and from Keaton’s clumsy escape to the sculpture-like impassivity of McQueen, which colours the scene with an oppressive tension. Aukje Dekker maintains the former Dead Pan‘s black and white look, absence of sound and short duration. However, this time, instead of an exterior where the construction appears as a naturalist element, we are in a vacant studio where a house is staged at the centre. The camera is fixed; the body and the face of the artist appear as solemn and inexpressive. The only true movement is the fall of the façade. Yet there exists a greater sensation of disturbance due to the frame changes. The action appears to repeat itself, insistently, but actually we are attending a dissection of the same scene from different angles, until it is completed in 360º. The façade falls on the body of the artist, who does not react. In both the original and McQueens’s remake the two men are strategically positioned and never hit by the window frame. In Aukje’s version, she is hit, as a result of the displacement caused by the declared body-subject substitution: being at the wrong time, in the wrong place.

Aukje Dekker is a visual and conceptual artist based in Amsterdam. Her practice is primarily characterised by an honest and often humoristic deconstruction of herself as an artist and the systems within the art world that determine value, meaning and authenticity. Dekker graduated from the Gerrit Rietveld Academy and completed a double MFA at Sandberg Institute, Amsterdam; and Central St Martins, London. Dekker’s works have been exhibited in various galleries and museums including Ultra Super New Gallery, Tokyo; Museum Boymans van Beuningen, Tel Aviv Museum of Modern Art, Rotterdam, Art Rotterdam, FiAC, and the Paris Opera. She is represented by gallery He-Ro. Alongside her projects as an independent artist, she is a founder of the Eddie the Eagle Museum and Society SEXYLAND, a conceptual nightclub in Amsterdam North. 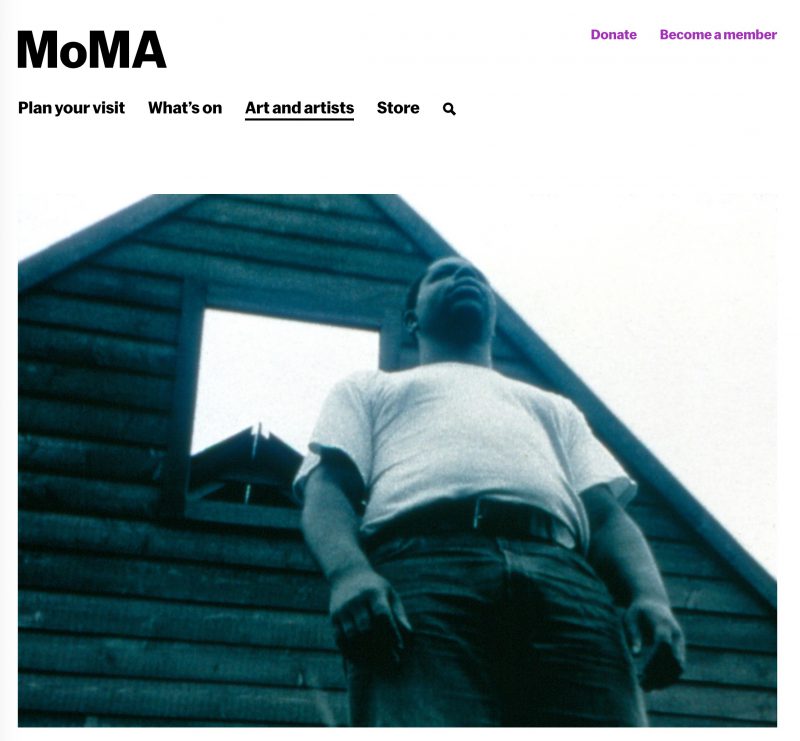 Deadpan is based on the iconic hurricane scene in Buster Keaton’s 1928 film Steamboat Bill, Jr., in which the title character (played by Keaton) stands in front of a house as its facade, detached by strong winds, collapses around him. In one of the most legendary stunts in silent-film history, Bill is positioned in the exact spot where an open window hits the ground, leaving him unscathed. With Deadpan McQueen has reimagined this scene as a short film, casting himself as Bill. A sequence of shots dissects it from various angles, transforming slapstick into a cinematographic study. By positioning his body in relation to Keaton’s, McQueen implicitly comments on the invisibility of black identity in the early cinema canon. While Keaton quickly scampers away after a comically delayed reaction, McQueen remains in the wreckage, stoic and unfazed by near disaster. As the action relentlessly repeats, the speed at which the house collapses increases.

“Buster Keaton’s 1928 silent movie Steamboat Bill, Jr… is most famous for that staggeringly clever and ambitious shot of the house front with the strategically positioned open window collapsing on top of our hero, leaving him unscathed. It is a sublime vision of innocence being protected by comically benign forces – famously pastiched by British artist and Oscar-winning film-maker Steve McQueen in his 1999 video piece Deadpan. Steamboat Bill, Jr is a Romeo-and-Juliet drama and also a gently tender story of a man coming to respect and love his son. Bill Sr (Ernest Torrence) is the captain of a tatty old pleasure boat who hasn’t seen his son since the boy was a baby. He’s hoping for a strapping lad to help out with the business. But Bill Jr (Keaton) turns out to be a delicate aesthete with an absurd ukelele and annoying bohemian beret. Even worse, he’s in love with Kitty (Marion Byron) the daughter of JJ King (Tom McGuire) the arrogant owner of a rival boat. The ensuing farce involves miraculous physical comedy and stunt-work. Keaton makes it look easy. The final storm sequence is a breathtaking apocalypse.”

Peter Bradshaw’s review of Steamboat Bill, Jr. in The Guardian