The 16th Istanbul Biennial opened last week, with supporting events across the city, the most significant of which was the opening of the superb new Arter museum for contemporary art, designed by Grimshaw Architects: https://www.arter.org.tr/en

The Biennial’s title, The Seventh Continent, refers to the gigantic floating mass of plastic debris – also called the Great Pacific Garbage Patch – that covers around 3.4 million square kilometres of our oceans. As the Biennial’s Curator Nicolas Bourriaud writes in his curatorial statement “It is a new world, made up of debris… one that we ourselves have created, without even being aware that we were doing it. And what we have created is exactly what we did not want. A continent composed of everything we have rejected, it is the ultimate symbol of the Anthropocene era.”

Excess, waste and alienation then, form the focus for the 56 participating artists. Compared to the strangely convoluted curation of the latest Venice Biennale, The Seventh Continent has the virtue of curatorial clarity. Bourriaud’s vision is pragmatically pessimistic:

“Now, more than ever, the artist must be recognised as the absolute other, a person who does not depend on what exists or what is accepted, but stands separate. Artists can show us what we have created, unaware. They are tribal representatives who modify and reinvent their cultures, and create new ones… I would say that the message of the whole Biennial is that now, in this new world, we are all aliens – aliens from each other – and we had better get used to it, and make from it something vital and viable.”

Here’s our pick of our favourite works in The Seventh Continent:

Simon Fujiwara (b. 1982, London, UK) often investigates dominant cultural forms such as tourist attractions, famous icons, historic narratives and mass media imagery at times even collaborating with the advertising and entertainment industries to produce his works. Through a process he calls ‘hyper engagement’ his work creates a portrait of a media generation, compelling and at times disturbing.

This body of work began with the artist’s discovery of a prop maker’s bin on the outskirts of Istanbul. He has integrated the discarded mouldings of parts of classic cartoon figures into a series of architectural fantasies.

Unlike the theme park ride from which the title derives, this small world is not divided into stereotyped representations of nationhood. Instead, each sculpture is a building designed for a particular use and is populated with model subjects; A bust of The Joker is set at the centre of a panopticon prison, the cell block rotating past his gaze. A raised and clenched fist, flanked by armoured vehicles, is the centrepiece of a municipal square. An ultra-modern gallery building, showing tiny versions of blue-chip artworks, is built around the head of Scrooge McDuck. The Pearly Gates nestle in the beard of Getafix as the entrance to a cemetery inside his head.

The absent architect’s utopic vision dominates this miniature world whilst the anonymous, monochrome, populace exist only to serve it’s logic. Much as if they were being carried along, contained and pacified by the merry-go-round carriage with it’s safety bars firmly clamped in place.

Turiya Magadlela (b. 1978, Johannesburg, SA) is known for her use of fabrics in conceptual installations to make works that explore the relationships between personal narratives and wider socio-political histories.

The walls and ceiling of the tunnel-like room are lined with three works made of pantyhose (tights) stitched together. The ceiling hangs into the space holding, diffusing, softening the light from above. The tights produce a delicate, intimate feeling. Almost ethereal yet undeniably of the body. There is a subtle violence too, in how the cloth pulls and rucks at the stitches fixing it to its neighbour.

At the far end, partly concealed by the hanging fabric, is a sewing machine and chair. The artist sits here, behind the hanging artwork, talking to visitors as she sews. An intimate annex, intentionally separated but not completely, just enough to imply privacy, or the need for such, without allowing it.

The arrangement challenges the viewer’s sense of appropriate behaviour. To experience the work, as viewer, one may also intrude upon a private moment shared by strangers. One may also take the opportunity to share something private with the artist themselves whilst accepting that other strangers may overhear.

On entering the space, a grand room in the club house of a private yacht club on the Princes Islands, you are immediately confronted with a somewhat intimidating tower of technology. It is the back side of the LED screen on which the work is played out, all black panels and cables, blinking lights and the faint whirr of cooling fans.

The screen seems to be placed in the, otherwise typically grandiose, recency-style room in a manner intended to maximise a sense of the artwork’s intrusion into, or perhaps colonisation of, the space and its aesthetic/politic.

The grid of tiny LEDs that make up the visual plane of the screen collaborate in complex programmed sequence to display an animation of an avatar holding a flame. The figure, based on trans model Valentijn de Hingh, a sometime collaborator of the artist, is caught in a seamless looping movement, endlessly present at the threshold to an unknowable realm.

There are associations with the mythical, the elemental, the technological, and the body. A sense of lack, of a knowledge lost, both to the past and to the future. A new anxiety both provoked and also allayed by the avatar’s ceaseless vigil.

A simple concrete square in the centre of the floor acts as a plinth to the bleached skeleton of a water buffalo. It is unnaturally clean. The details and outline perfectly sharp as if all remains of the flesh have been chemically removed leaving a perfect relic of photoshopped, hi-resolution precision. The ribs on its right side have been carefully flipped producing a formally pleasing curve invoking a poetic sense of the body’s acquiescence to gravity’s embrace.

In the corner of the room a two channel video work shows documentary film of herds of wild water buffalo traversing their habitat. Landscapes that would have once been open pasture and forest, now transformed by the rapid development of Istanbul’s urban sprawl.

The sense is one of lament, of a soliloquy divulging the artist’s inter-species empathy. A soliloquy rather than a monologue; as if to address the audience directly might seem too critical.

Glenn Ligon (born 1960) is an American conceptual artist whose work explores race, language, desire, sexuality, and identity. Based in New York City, Ligon engages in intertextuality with other works from the visual arts, literature, and history, as well as his own life. He is noted as one of the originators of the term Post-Blackness. From: https://www.tate.org.uk/art/artists/glenn-ligon-10429

The word America hangs upside down across the centre of the room. It is spelt out in red bulbs suspended in the manner of the illuminated banners, known as Mahya, seen between the minarets of mosques during Ramadan in Turkey.

Inverted, the word seems vulnerable, rendered impotent. The illumination only seems to increase its embarrassment. The spacing of the bulbs is such that the word is difficult to make out. What you see, more easily, is the room behind and around the dependent word, and how the light it emits colours the surfaces it touches upon.

This latest iteration of Glenn’s body of works using the word America, made especially for the 2019 Istanbul Biennial, brings local associations and implications to a well established practice.

In an adjacent room a film is playing – ‘James Baldwin: From Another Place’. Made by Sedat Pakay in Istanbul in 1973, It shows Baldwin walking amongst the crowds in Taksim Square to a voiceover of him talking about living abroad, the black experience in America and his private life. Glenn has made two new films, in response, showing contemporary life in Taksim.

James Baldwin lived in Istanbul for over a decade where he wrote some of his most important texts and found a welcome sanctuary from the very American problems he addressed in his activism.

All images courtesy of the IKSV online press resource. https://bienal.iksv.org/en 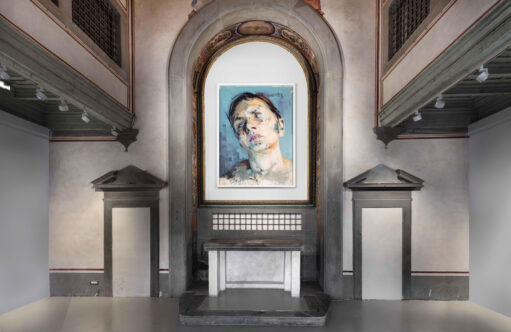 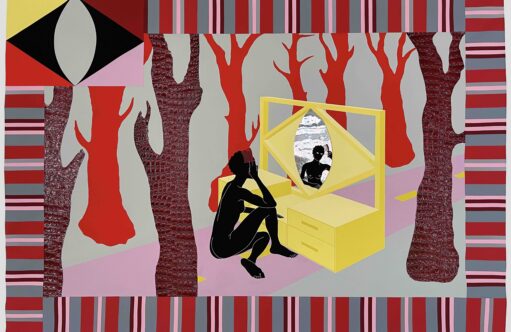 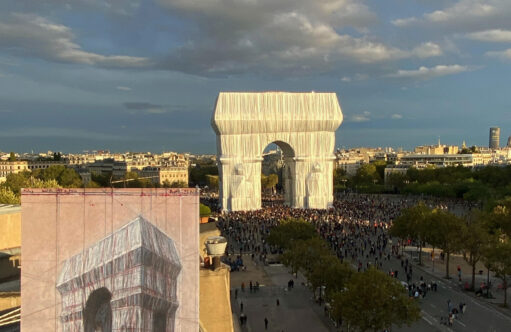 On Difficult Art
By Hussam Otaibi