Using the work in his current solo show I think I’m in love, as a starting point, Dutch artist Thomas Raat and Nick Hackworth will explore the long, seminal, historical moment in which high Modernism slowly decayed into the contemporary postmodern culture.

The talk is open to the public.

On Thomas Raat’s exhibition I think I’m in love

Raat’s practice is a strange and wonderful thing. Even after close inspection a solo show by Thomas Raat gives the confusing impression of being a curated group show. A certain neatness and graphic quality links many of the works. The variety of forms, materials and styles on display, however, serves to frustrate both a casual attribution of the works to a single author and the easy legibility that audiences have long been conditioned to expect in contemporary art.

This multiplicity is the result of a carefully cultivated creative and intellectual breakdown. Early on in his career, Raat developed what he has described as an academic, postmodern painting practice that revolved around the clever deployment or deconstruction of formal strategies – a practice well engineered, it turned out, to deliver the success he enjoyed in the pseudo-intellectual milieu of contemporary art. Some years ago, however Raat discovered, to his mild surprise, that a quiet but profound existential crisis had crept upon him. He had developed a pronounced claustrophobia in response to the smallness of the art world’s mental universe.

I think I’m in love presents the fruits of Raat’s highly determined cultural breakdown. In place of cynical formal strategies Raat gives us a kind of primordial semiotic scramble. In a diagnostic effort to locate his own cultural malaise in a wider historical context, Raat has journeyed to the fons et origo of modern cultural dissonance – the long moment in which utopian Modernism began to slowly degenerate into the hyper-commercial, postmodern, digital soup that passes for contemporary culture.

Each of Raat’s works is, in a sense, a set of coordinates from a map of this epic, cultural, comic-tragedy. A Barnett Newman sculpture, wrapped up in its own self-importance, finds itself formally reiterated in a series of black candles that will, of course, burn themselves down into nothingness. A classic passage of Bauhaus typography arrives in the gallery, via one of the artist’s favorite album covers, inverted and fetishized. The idea of the monochrome, suffers a still worse fate, presented here stripped of all aura, painted with a deeply unfashionable Peach Melba coloured, stippled house paint – a subtle orgy of poor taste, rounded off, as it were, with a bright fuchsia tray frame. 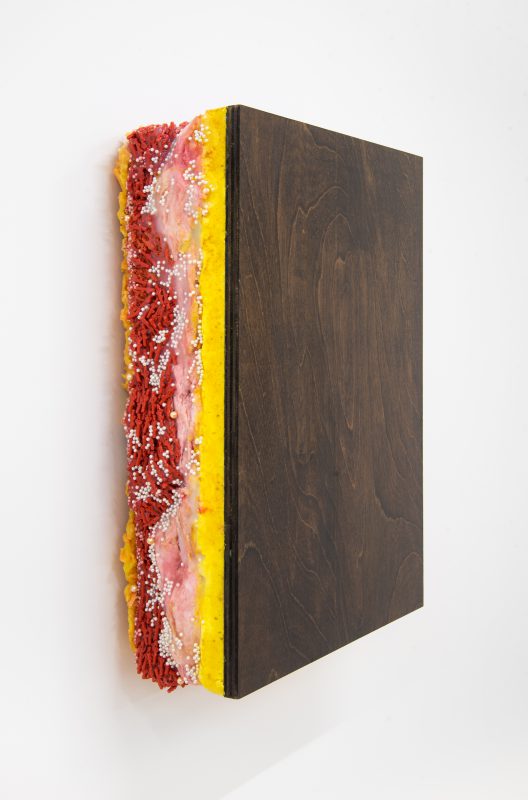