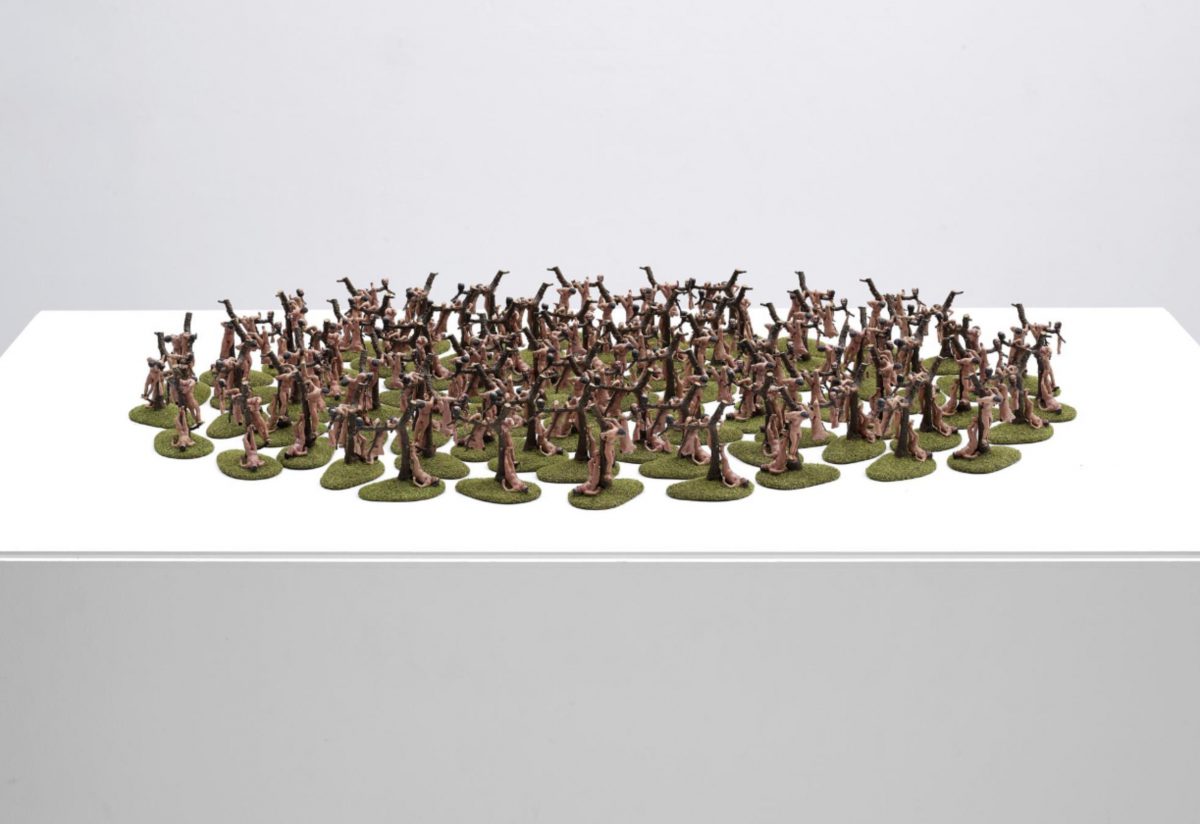 Jake And Dinos Chapman, Great Deeds. Against the Dead!, 1994

Engaged in a virulently pessimistic philosophical program articulated through the medium of contemporary art, Jake & Dinos Chapman produce works in a variety of media that deploy humour and a sophisticated and perverse play with contemporary semiotics that serve to undercut and satirise many of the unthinking beliefs that animate contemporary liberal culture – from assumptions about the enlightened and enlightening nature of art, to faith in the progressive nature of contemporary, secular societies.

The skill of their practice in manipulating the basic semiotics of contemporary culture is testified by the outrage their work has often provoked from both culturally conservative elements and the liberal press. Amongst their most controversial works were their famous, Fuckface series of childlike mannequins made with adult genitalia on their faces and their Hell series of sculptures, that depict, within vitrines, hundreds of miniature Nazi figurines torturing and killing each other in spectacular and absurd orgiastic violence. The later divided popular commentators as to whether is was a brilliant new form of war art or in fact a disrespectful joke at the expense of the Holocaust. The artists were clear that the work was neither and that all these readings were only possible if the commentators had not actually looked at the work and drawn some reasonable assumptions about what the work actually was.

This has often coloured the general perception of their work as being deliberately provocative, whereas in fact part of the operational dynamic of the work is designed to highlight the idiocy and hypocrisy of such positions, by the deployment of highly simplistic semiotic cues. To an extent the crudeness of the shocked reaction to some of their works is itself part of the work.

Embodying a healthy disbelief in the possibility of meaningful communication, the works are happy to operate according to their own logic and often operate within a system of signs built up by the artists in their previous works. Thus the Chapman’s deliberately use repetition of certain key themes within their work for strategic reasons, notably – the work of Goya, especially his series of etchings The Disasters of War, the iconography of McDonalds, deployed most notably in their Chapman Family Collection works and their Hell series of sculptures that seemingly depict Nazis in the form of tiny models, engaged in orgiastic and absurd violence. This repetition can be seen as an attempt to satirize the nature of content itself and by extension a certain essentialism that is encoded in definitions and descriptions of individual themes.